From the Ashes: the Power of a Second Chance

Bloomington, IL 2013: “From the Ashes” created with students from the Regional Alternative School.

The student participants from the Regional Alternative School.

“From the Ashes” was a homecoming for me—literally. I left my hometown of Bloomington-Normal, Illinois when I was 18 and have since lived in Chicago, San Francisco, Washington DC and Brooklyn as well as stints in places like Rio de Janeiro, Nairobi, Santiago de Cuba, El Salvador, Cape Verde and on and on… I’ve always gone back home regularly to visit my parents, and the idea came up on many occasions to organize one of my art & social action projects there.

The opportunity finally came by way of local partners who came together to help organize and fund the project. I worked with a group of high school students at the Regional Alternative School who had, for a variety of reasons, not been successful at their traditional high schools and now were being given a second chance at getting an education. I’ve always especially enjoyed working with kids who’ve had a rough time in life, the ones who are considered “challenging” but who I often find to be the most interesting and inspiring. This is probably partly due to my own adolescence, when I had a few challenges of my own. While I wouldn’t compare my experience to some of the severe cases that I’ve come across in my work with young people, I remember feeling isolated and misunderstood, and acting out in a variety of ways: vandalism, shoplifting, drugs… and then a relationship I was in when I was only 15 and 16 years old resulted in pregnancy. While my relationship with my son ended up being one of the best things that ever happened to me, it was quite a shock to my teenage mind to discover that I would be a father—so much responsibility at such a young age!

One of many workshops that led up to the design and creation of the mural.

The first week with the students was all in the classroom. We discussed issues important to their lives and their communities and came up with the theme of “Second Chances” for our project. We studied mural art and its impact on humanity from ancient cave paintings to modern street art and graffiti, took turns drawing each other in different poses, learned a variety of artistic skills and concepts, played games, wrote poetry and songs based on our theme, and created individual works of art. All of this led up to the design of our mural, which we painted over the course of the second week.

Using their ideas, I came up with a design that had several principal figures but that had room for each individual to express themselves through their poems, abstract designs, drawings and written messages, all inspired by the importance of second chances in life, of recognizing unrealized potential, and of the possibility of the rebirth. The students were excited about the project, especially as they have no art in their normal curriculum. It was amazing to watch them represent their own experiences and feelings on the wall, putting it out there for the world to see. One bright, energetic 16- year- old girl pointed to a heart she had painted that had been stitched up. “This is my symbol,” she said, and told me that her childhood had been rough and she had experienced a lot of heartache in her family, but that she had made it through and was feeling positive about her future.

We had a great time painting, being interviewed by local media (TV, radio, front page of the local newspaper!) and coming up with a presentation for the inaugural event, which took place on a beautiful autumn Saturday in the parking lot in front of the mural. There was a big turnout, with friends and family members, local officials and even the mayor, who gave the inaugural speech. I spoke as well, as did three of the students. Thanks to all the sponsors who made this experience possible: the Downtown Bloomington Association, the Mirza Arts & Culture Fund, the Illinois Prairie Community Foundation, and a big thanks to the students and staff of the Regional Alternative School for all your hard work!!!  –Joel B 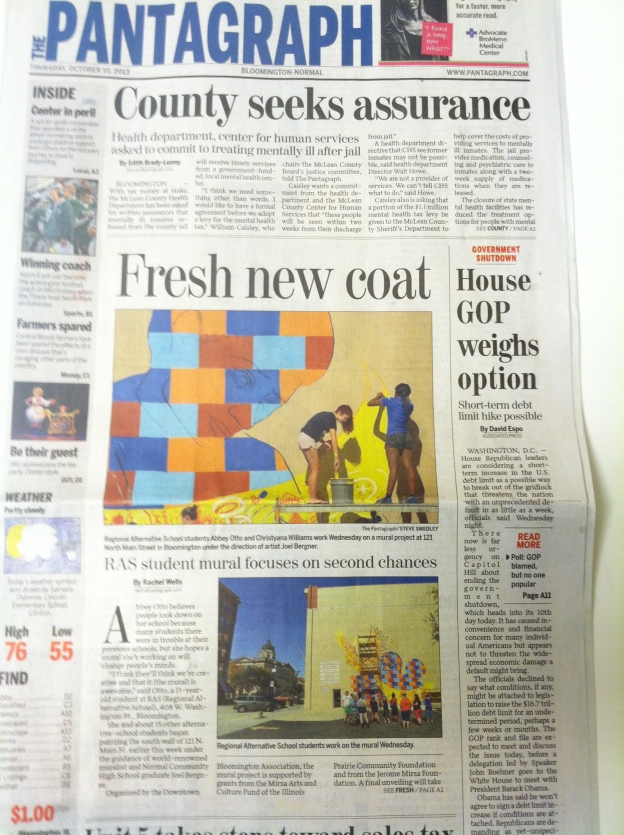 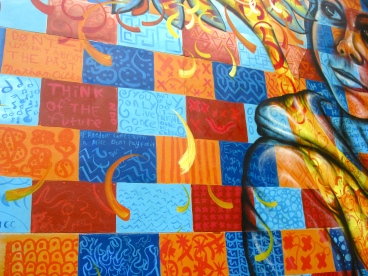