On a blazingly bright Tuesday morning in Za’atari Syrian Refugee Camp, I met with my team of fellow artists and educators to plan for our day of workshops and mural painting with children. My friend Hamed, a Syrian who works as a hygiene promoter in the camp, told me of his pain to learn that a close friend of his had been killed fighting the government. He showed me pictures of a young, handsome man who had studied chemistry with Hamed at university, earning his masters degree and embarking on a promising career, only to become caught up in the brutality and tragedy of war. Later that morning as we were painting with the kids, one of our most dedicated young artists, a 12-year-old boy named Eyud, pulled back his long sleeves to reveal horrible disfiguring burns on his arms and leg. He told us how agents of the Assad regime, angry that his father had defected from the army to join the rebels, had electrocuted him, scarring him physically and emotionally for life. Looking at this quiet boy with a sweet demeanor, it was impossible for me to wrap my mind around the evil of this act and understand how thousands of such tragedies could be happening right in front of the world’s eyes every day.

As millions of Syrians have fled to neighboring countries, they have been greeted by international humanitarian organizations that provide food, shelter, medical care and other basic services. But what about education, jobs, activities for youth, poverty and mental health issues? There are many complex questions that do not have easy answers; many problems that do not have simple solutions no matter how much aid money is thrown at the crisis. With the goal of improving the lives of children in the enormous Za’atari refugee camp in northern Jordan, I recently collaborated for the second time with the organization AptART and local artists and educators on a community-based Street Art and education project supported by ACTED, UNICEF and ECHO. Together, we led workshops with kids in which they learned about water conservation, hygiene issues in the camp, artistic techniques and conflict resolution. Through discussions and art, they explored social issues, their longing to return to Syria, their dreams for the future, and their plight as refugees. Dozens of children had the opportunity to participate and add their own creativity to murals that we created throughout the camp, adding color and life to the desolate environment and spreading messages of hope to camp residents.

For me, one of the biggest benefits that this project has had has been involving local artists who can then continue the work once outsiders like myself have left. One such artist is Yusra Ali, a Palestinian woman who lives in Mufraq, the town right outside the camp. With her upbeat personality and a talent for mixing her love of art with working with children, she has had a huge impact on all of us and has already begun leading arts and education workshops outside of the project. Another star was Ali Kiwan, a soft-spoken Syrian artist and resident of Za’atari who specializes in classic Arabesque patterns. I had a great time learning from him and we collaborated on many murals, combining the traditional patterns with aerosol painting and children’s art.

This project aims to give voice to refugee children who are often forgotten about in the barrage of horrific news stories about the war. It intends to connect these kids to positive role models and involve them in educational and creative activities, thereby playing a role in the rebuilding of their communities. For many, this is the only organized educational program they’re involved in. The art itself features positive messages and uplifting imagery, a breath of fresh air in an otherwise colorless landscape. We are all looking forward to future collaborations with youth, local artists and educators around the region. There are currently plans to bring similar AptART projects to the Syrian refugee populations in communities across Jordan, Turkey, Lebanon and Iraqi Kurdistan later this year and beyond. 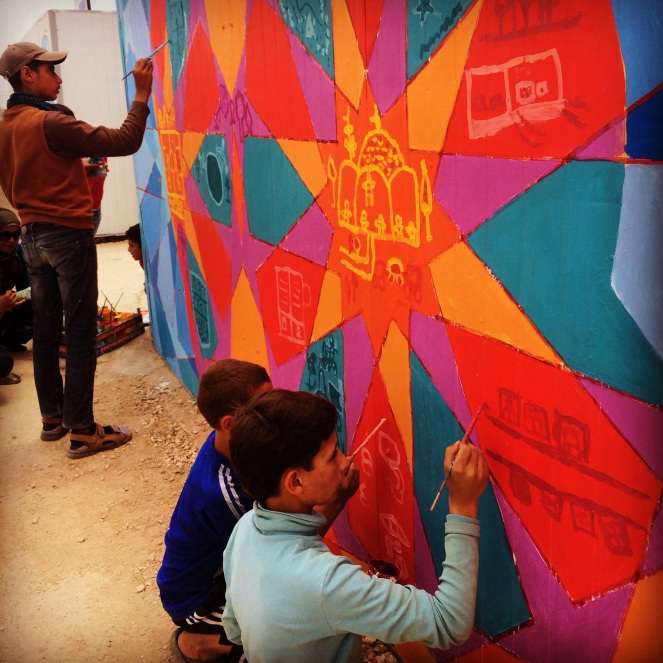 Teens in Za’atari Syrian Refugee Camp paint about what they miss most from home as part of our arts & education project,

Za’atari Syrian Refugee Camp, 2014, “I dream of…” right side: local kids participated in this mural, expressing their dreams for the future. 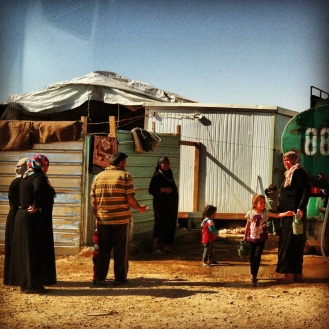 Za’atari Syrian Refugee Camp, 2014: (detail shot) collaboration with local youth, who painted about what they missed most about their homes in Syria in the colored shapes.

Workshops with Syrian kids in the Za’atari refugee camp focusing on conflict resolution, the arts & education about sanitation, hygiene and water conservation in the camp. 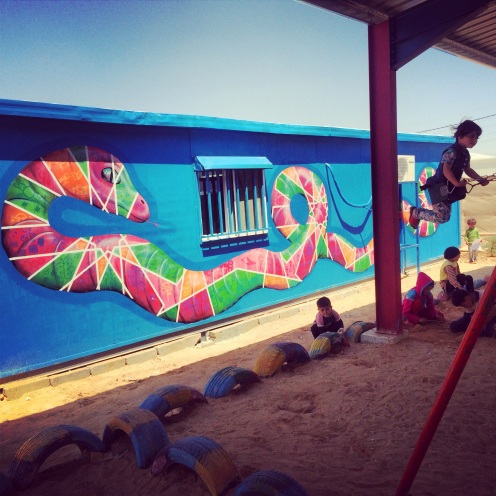 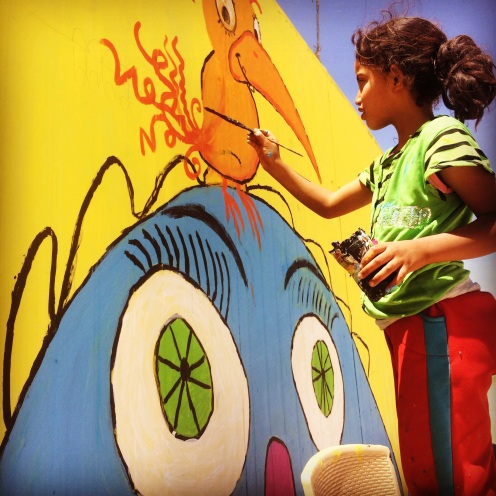 A Syrian girl painting a mural in Za’atari refugee camp

Wheelbarrow art! In Za’atari Syrian Refugee Camp, the wheelbarrow boys are everywhere, smuggling in banned goods from the outside. We led educational workshops with them and decorated wheelbarrows as part of an ongoing project with AptART, ACTED and UNICEF. Photo courtesy of AptART. 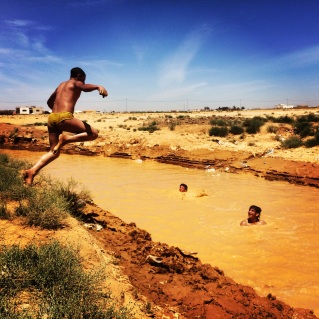 Refugee camp swimming pool! What the kids in Za’atari do to beat the heat… 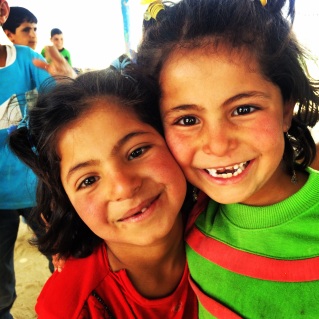 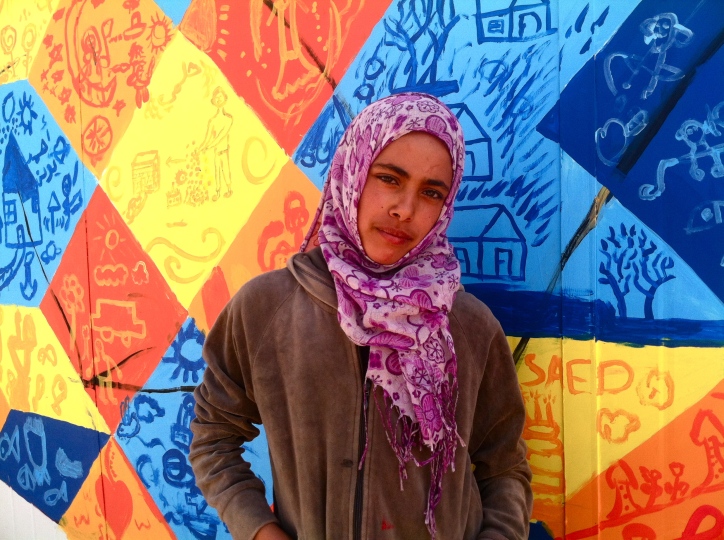 The arts give children in difficult situations an outlet to have fun, express themselves, bond with others and learn a variety of skills. This girl lives in Za’atari Syrian refugee camp and participated in our arts & education project

Working on a new piece right outside of the Za’atari Syrian refugee camp with boys who smuggle goods into the camp. There is little legal trade in the camp other than essentials, so these guys risk frequent beatings by the cops to make money on the huge black market. In our mural the kids envision the building of a new sense of community, as the old one has been lost. 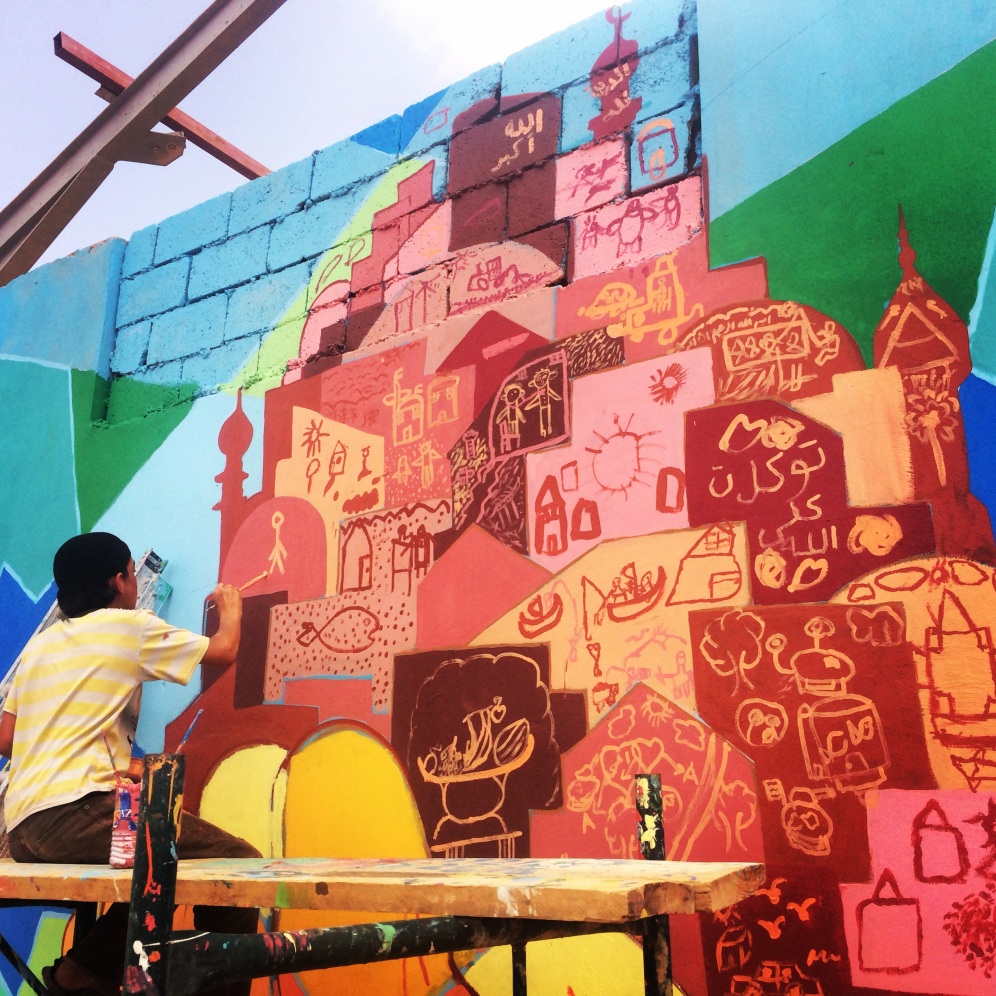 Syrian refugee kids are creating their own mural-neighborhood to reflect the growing realization that they may be displaced for a long time and must build new communities.