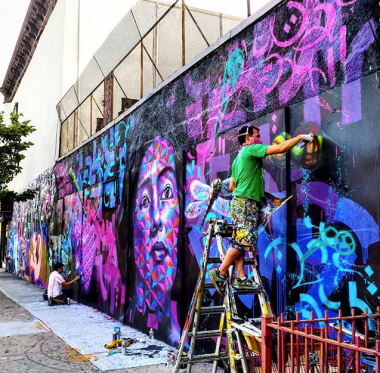 This month I had the pleasure of collaborating on a mural with an artist I’ve admired for a long time, my friend Chris Soria. As our approaches have a lot in common, especially our love of layering and patterns, we chose to fully integrate our two styles into one cohesive mural instead of simply dividing the wall into two sections. The location was on Harman Street in Bushwick, Brooklyn. Our piece is the latest to be organized by Spread Art NYC, an initiative led by the Arabic calligraphy street artist and tattooist, Rocko, who has a community-oriented approach to his projects. Many of the murals in the area feature Puerto Rican icons in reference to the local culture. Chris and I spent time considering many potential themes for our mural, but ended up creating a design inspired by the story of Ix Chel, the Mayan goddess who was killed for having a relationship with the Sun God, but was then awoken from death by hundreds of dragonflies. We liked the fact that the story featured a strong female character, as most of the nearby artwork was male-dominated. We also recognized that the Latino population in Bushwick are from many nations, not just Puerto Rico. As various Mayan peoples dominate southern Mexico and much of Central America, it is fitting to have a mural inspired by a Mayan story. As we painted, we were welcomed by the residents, who even brought us cold drinks and sweets. Thanks to everyone on Harman Street and to Spread Art NYC!

Chris Soria on the wall. Photo by @slimjim72 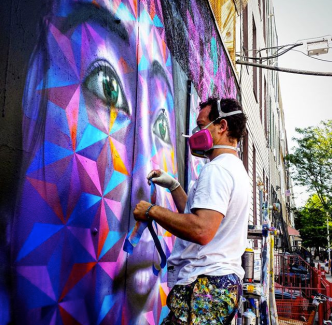