In September, I had the honor of joining forces for the second time with one of my favorite organizations, Street Child United, which organizes an international network of NGO’s that focus on working with society’s most vulnerable and marginalized populations, homeless youth. Last year at the mega-event Street Child World Cup, groups of boys and girls from 19 countries who had experienced the street life all came together in Rio de Janeiro, Brazil to play a soccer tournament, create art and advocate for the rights of their fellow street youth around the world. It was a truly unforgettable experience for all of us who participated, and many lifelong bonds were created. Concrete results were seen, as evidenced by Team Pakistan, who were greeted as heroes when they returned to their country and awarded scholarships to further their education.

This year, they organized the Street Child Summit in London, where street youth advocates from dozens of countries joined forces in common cause. Among these advocates were six “youth ambassadors” from Brazil, Pakistan and Burundi who had all experienced the street life and were now participating in a 10-week advocacy course in London focused on exploring the international plight of homeless youth and studying English.

Nearby at the Village Underground, a legendary music venue with a giant outside wall that has been blessed with murals by some of the world’s most renowned artists over the years, I was given a mission: to create a huge, impactful mural that would raise awareness for the plight of street youth around the world in only four days! Luckily, I had the assistance of two talented artists (and awesome people!), Bec Dennison and Meghan O’Malley, as well the participation of the youth ambassadors. We painted a giant youth (modeled by the Brazilian youth ambassador Jessica Medeiros) filled with many smaller young people, all shouting and cheering and protesting. The figure has a megaphone, and out of the darkness she shouts into it, producing a vibrant explosion of colors, animals and a message that reads, “I may be a child/ I may live on the streets/ but I am somebody!” In line with the theme of the Street Child Summit, the mural makes a statement that while they may be excluded and oppressed by the societies of the world, street youth and those in solidarity with them can achieve a strong voice by joining together and pushing for concrete reforms. 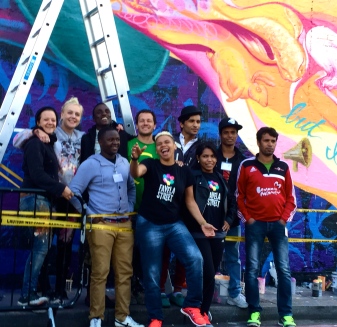 For four grueling days we worked from dawn to nightfall, through London’s notoriously dreary weather, loud trucks and traffic coming within feat of us, and lots of coffee. The street in the popular Shoreditch area was always packed with passersby, who stopped to check out the mural and learn about its message. On the final day, the entire group of summit participants arrived at the mural singing a beautiful South African song. Several of us gave short speeches, including one of the youth ambassadors, and it was moving moment in which so many incredible people came together in unity. Thanks to Jo, John, Bec, Meghan, the folks at the Village Underground (especially Javi!), the youth ambassadors and everyone involved in the Street Child Summit!!

The view from the scaffolding as night fell in London. 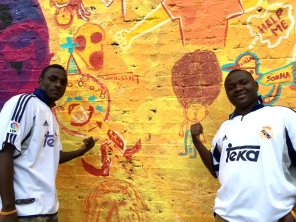 The Burundi youth ambassadors show off their work. 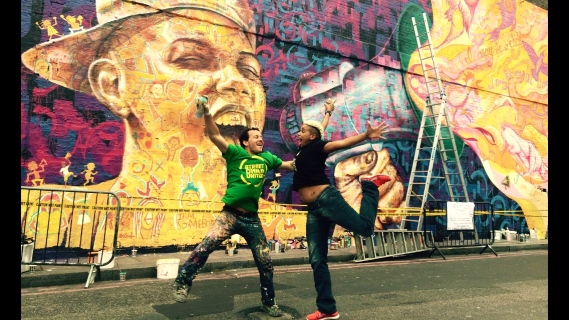 Me and Jessica celebrating! 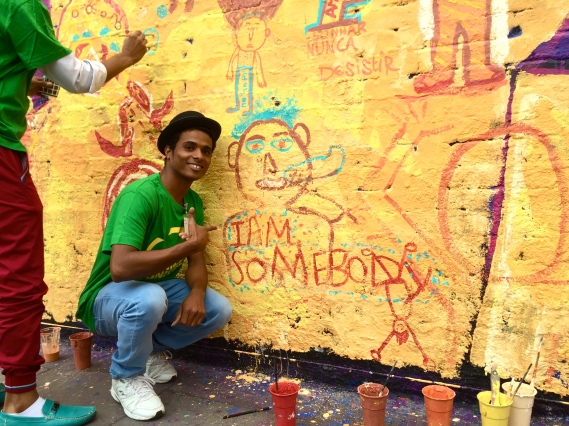 The youth ambassador from Pakistan makes a statement on the wall! 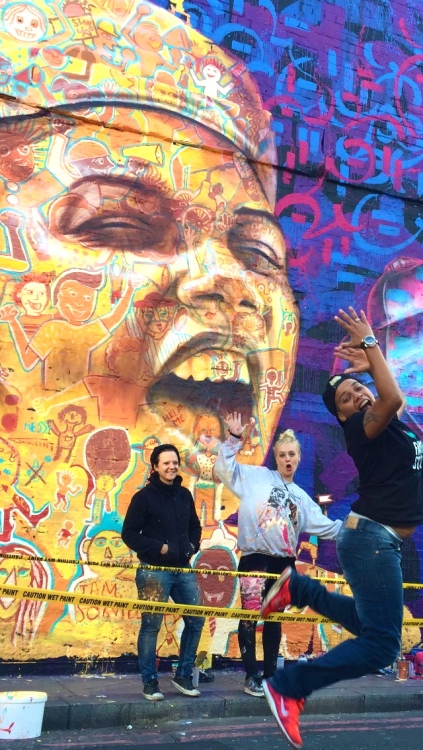