Art & Sustainability in the Dominican Republic 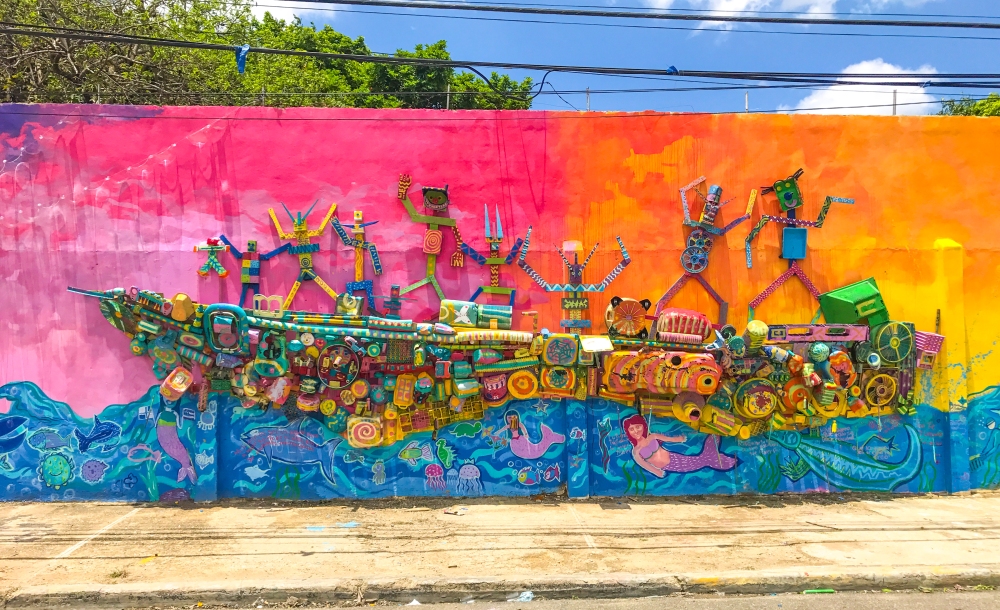 The Rafey barrio of Santiago, in the Dominican Republic, is a neglected community that is home to the largest trash dump in the city. Max Frieder and I, both co-directors of the organization Artolution, arrived in Rafey in April to facilitate a multi-media public art project in partnership with 3 Santiago artists, a group of local teenagers from the local San Pedro Nolasco High School, and the organizations Centro León and Meridian International Center. We all met on the first day for the introductory workshop, in which we explored important issues in the lives of the youth and environmental problems affecting the community. We got to know one another through activities and games, and had a group discussion about the imagery and themes we would paint in our mural. Our young participants were full of energy and ideas, and took their responsibility seriously to design a public work of art that reflected their perspectives, opinions, and identity. By the end of the day, after an intensive sketching session, we put everyone’s ideas together into one cohesive design. We were ready to implement our vision!

Given the environmental degradation in the country and the vital issues related to trash in Rafey, we chose to include in our mural a sculpture made entirely of repurposed trash from the dump and from the streets of the community. On the morning of the second day, our crew of students and artists visited the Rafey trash dump to collect material. It’s a sprawling sea of trash with many trash pickers, known here as busos, wading through filth each day in order to separate the various types of recyclables. It was an intense experience for all of us wading into what appears to be an endless garbage city, stretching on as far as the eye can see. Many of the teens remarked that they had never really thought about all the waste that they created; where it goes and who must sort through it. We chatted with several busos, who made me realize how vital their job is in society, and how unfair it is that they are not given the respect they deserve, resigned to live in shanties on the side of the dump.

Upon arrival at our wall, we realized how enormous it was. It was the outside wall of the school, facing a prison on the other side of the street. We got to work painting our mural, a process that took two weeks under intense Caribbean sun, sudden torrential downpours, and joyous moments of creativity and human connection.  Our sculpture, known as the “boatstrument,” or “barcostrumento,” was integrated into the overall mural, and functioned as a percussion instrument, complete with drum sticks attached by wires. Everyone had a blast creating it, and it will now live on in the community as a permanent interactive work of art. 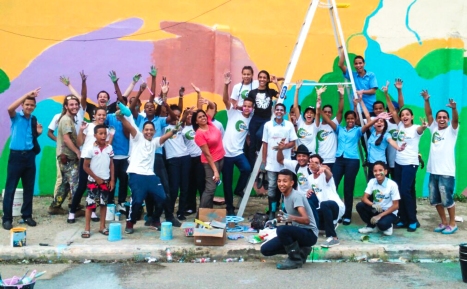 We had the pleasure of being accompanied by Dominican filmmaker Jean Carlos Ramirez, who created several videos over the course of the project. At the closing ceremony, the youth reacted with excitement as a short documentary was screened featuring them. It was the first time that they experienced adults valuing something that they had created and heaping praise on them for their exceptional work. Representatives from the US Embassy in Santo Domingo who sponsored the project, spoke at the event, as did those from Meridian and Centro León. Max and I congratulated the youth, reminding them that they can continue to accomplish big things in life if they work hard and join together with their peers to achieve positive change. We all headed out to view our complete mural and have one last jam session, led by our partner artists and percussionist, D-Troya Lion. As we said our good-byes to our new friends, we were proud of everyone’s accomplishments, though sad that our time together was coming to an end. Muchas gracias to everyone at Meridian, Centro León, the US Embassy, the San Pedro Nolasco School, the local artists and all the incredible students for making this project such a success!

Students in the introductory workshop sketching their ideas for the mural.

Visiting the Rafey trash dump to collect materials for our sculpture 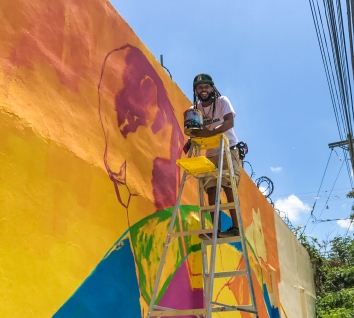 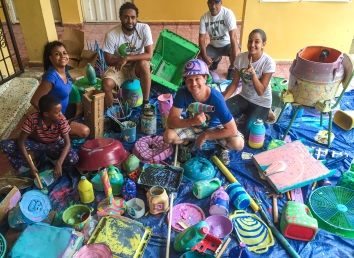 We had several downpours! 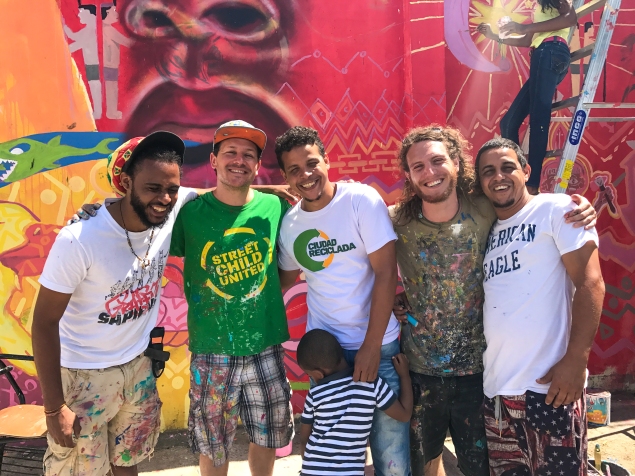 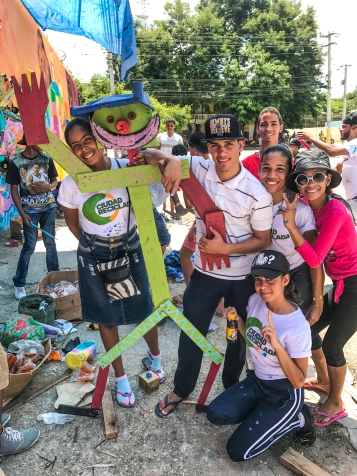 Creating people out of garbage!

Joel putting on some final touches.

Santiago, Dominican Republic 2017: The figure on the left represents a Carnaval costume popular in Satiago, while the woman on the right is a Mother Nature-style figure.

A detail of the participants’ contributions 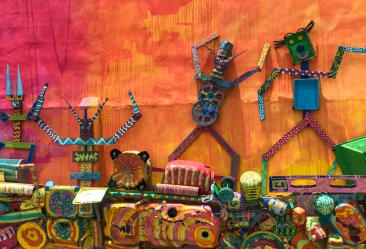 Aquatic life and dreams for the future

A detail from the students’ work: a Taino indigenous character and Ciguapa, a folkloric woman who lives with the beasts in nature and has a crooked foot.