Springfield, Ohio: Project Jericho, an organization that uses the arts to engage court-involved young people in central Ohio, partnered with Joel to facilitate an Action Ashé! project featuring the creation of a giant mural with the participation of 75 students, including teens recently released from juvenile detention, current inmates, those on probation and also children who are involved in the local YMCA, where the mural was painted. The participants used poetry and painting to reflect on violence in their community and the importance of the youth taking a leadership role in the struggle to cultivate a peaceful and positive environment. This project was the culmination of months of workshops in which the Project Jericho teens participated in activities such as dance, drawing, theatre, music and performed at a public event. 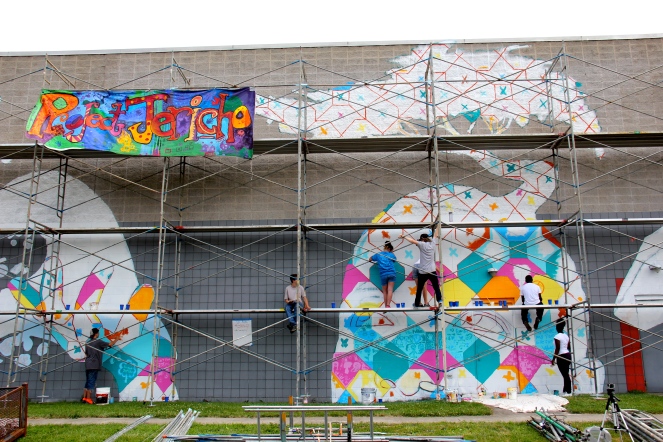 Getting started! photo by Lauren Houser 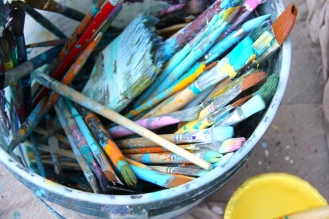 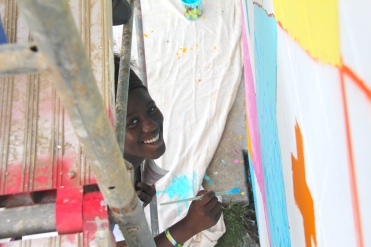 Our most dedicated student putting his aerosol skills to the test without giving his mother any grey hairs. 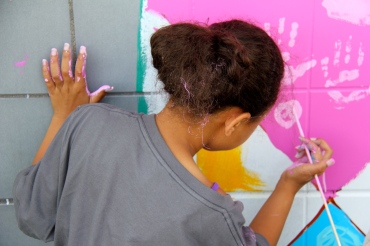 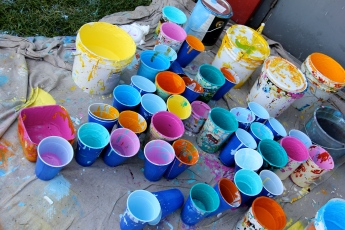 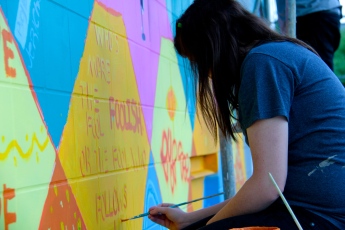 an ocean of poetry and expression 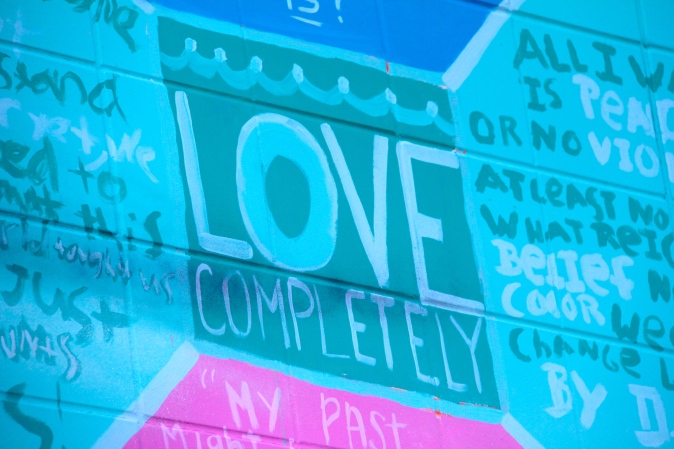 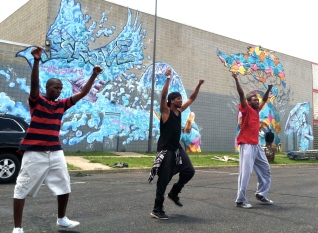 taking pics at the mural inauguration. photo by Lauren Houser 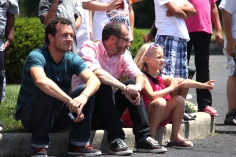 The teens put on a dance show for the crowd at the mural inauguration. photo by Lauren Houser

Bloomington, IL 2013: “From the Ashes” created with students from the Regional Alternative School.

“From the Ashes” Project: In October of 2013, Joel Bergner brought his Action Ashé! arts initiative to his hometown, Bloomington-Normal, Illinois, for the first time for the “From the Ashes” youth mural art project. Partnering with the Downtown Bloomington Association and the Regional Alternative School, Joel worked with high school students who had not been successful in their traditional schools for a variety of reasons, but were now being given a second chance at their education. Fittingly, the students chose “second chances” as the theme for their project.

One of many workshops that led up to the design and creation of the mural.

The first week of workshops was in the classroom, and included discussions of issues important to their lives and their community, and how these could be explored publicly through art. The teens studied mural art and its impact on humanity from ancient cave paintings to modern street art and graffiti, took turns drawing each other in different poses, learned a variety of artistic skills and concepts, played games, wrote poetry and songs based on their theme, and created individual works of art. All of this led up to the design of the mural, which they painted over the course of the second week.

The student participants from the Regional Alternative School.

Using the students’ ideas, Joel came up with a design that had several principal figures (which used two students as models and a rising phoenix) but that had room for each individual to express themselves through their poems, abstract designs, drawings and written messages, all inspired by the importance of second chances in life, of recognizing unrealized potential, and of the possibility of a rebirth. The students, who have no art in their normal school curriculum, were excited for the opportunity to represent their own experiences and feelings on the wall, putting it out there for the world to see. And the city paid attention: the teens’ project and their message were all over local TV news, radio, and the newspaper. One bright, energetic 16- year- old girl pointed to a heart she had painted that had been stitched up. “This is my symbol,” she said, and told the group that her childhood had been rough and she had experienced a lot of heartache in her family, but that she had made it through and was feeling positive about her future.

The grand finale came on a beautiful autumn Saturday at the end of the second week. Joel and three of the students spoke to a large crowd of family, friends, and community residents that had gathered in front of the mural for the inaugural event, as did the mayor of Bloomington and project partners. A band played, refreshments were served, and the community residents admired the mural and complimented the teens on their lasting contribution to the cultural heritage of the city. Special thanks to the project sponsors: The Downtown Bloomington Association, the Mirza Arts & Culture Fund, and the Illinois Prairie Community Foundation.

Students from the Regional Alternative School. 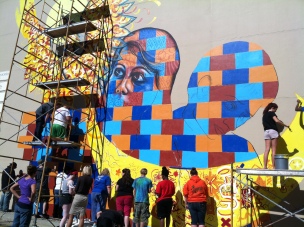 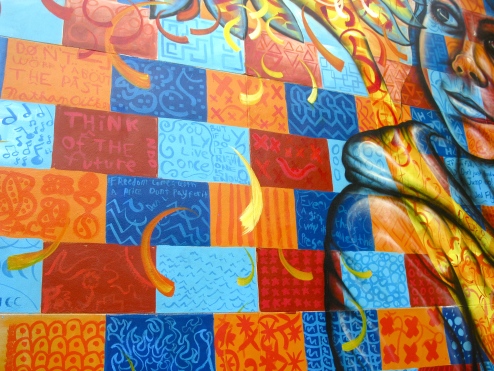