This gallery features highlights from Joel’s recent community-based public art projects with youth and communities around the globe. All of the following murals were designed and painted using Joel’s unique collaborative approach, which he is now promoting through the organization he co-founded, Artolution. All projects feature partnerships with humanitarian organizations, grassroots community groups, government agencies, schools and local artists. Click on any image to enlarge it and see more info.

Stuttgart, Germany 2017: Joel worked with youth from Syria, Afghanistan, Iraq, Iran, Gambia, Ghana, the Dominican Republic and Germany, this mural tells the stories of life’s journeys from struggle to hope, and of our ability to work in partnership across borders. With Park Inn by Radisson, Stuttgart. 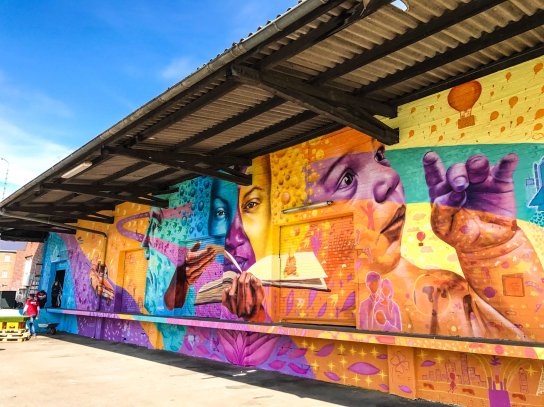 Stuttgart, Germany 2017: Detail with some of the youth participants. 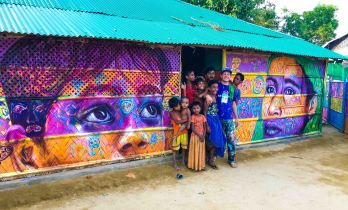 Amman, Jordan 2017: Mural with Syrian and Jordanian girls in Amman 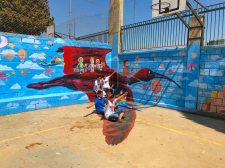 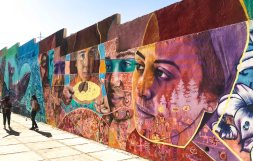 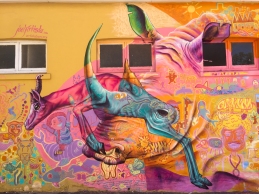 Johannesburg, South Africa 2016: Some of our participants!

Planada, California 2016: A mural that celebrates Alex, a local hero, pays homage to the campesino and to the rural, mainly Mexican population of this region. 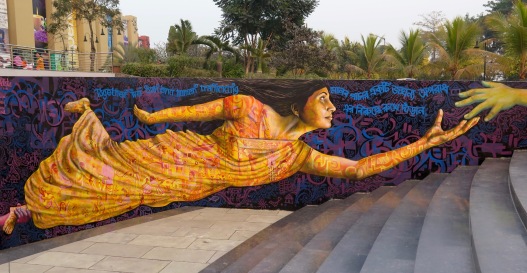 Siliguri, India 2016: This collaboration with 4 local Bengali artists (Anindya, Saptarshi, Santanu and Binod) was created for the International Anti-Human Trafficking Conclave. It aims to raise awareness for this issue, also known as modern day slavery, which is at epidemic levels in this region. Organized with Shakti Vahini, Meridian International Center and the US Consulate in Kolkata.

Planada, California 2016: Standing Strong in the Face of Hate! 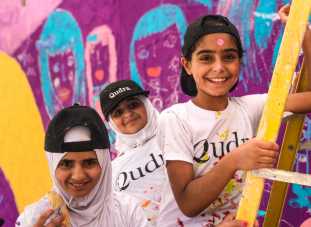 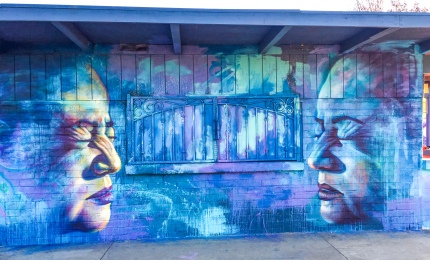 Planada, California 2016: Refusing to see each other…

Bucharest, Romania 2017: Joel worked with a talented group of street youth, who are empowered by their involvement in the circus arts.

Bucharest, Romania 2017: The group performing for the community during the closing ceremony.

Jerusalem 2015: Arab and Jewish children and teens came together to create this mural with Joel and his Artolution partner, Max Frieder. It is now displayed at the US Consulate

Jerusalem 2015: This side of the mural portrayed the pain of disunity among neighbors 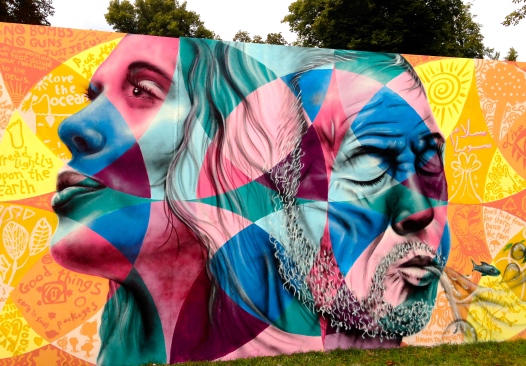 UK, 2014: Joel created an interactive mural as part of the Greenbelt Festival outside of London, which focuses on progressive social causes, music and art. Joel’s piece was prominently featured along a long wall in the entrance to the event, and festival- goers were invited to participate in the creation of the piece by adding their poems, drawings and messages on the colored geometric shapes. The theme was the environment; participants were asked to reflect on what we— as individuals and as communities— can do to begin the healing process and reverse the damage done to our natural environment.

Krakow, Poland 2016: Joel worked with teenagers in foster care to design and paint this community mural that explores local culture and envisions the community and families that the youth envision for their future. 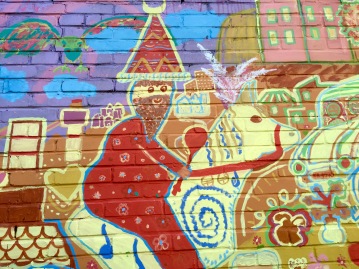 Krakow, Poland 2016: Detail; the lajkonik, a symbol of Krakow culture

Za’atari Syrian Refugee Camp, Jordan, 2014: I Dream Of… Syrian kids painted their dreams for the future inside the shapes of this mural. 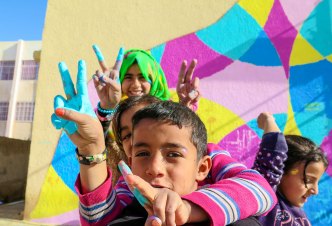 Santiago, Dominican Republic 2017: The figure on the left represents a Carnaval costume popular in Satiago, while the woman on the right is a Mother Nature-style figure.

Santiago, Dominican Republic 2017: The Boatstrument was created with repurposed trash, and has drum sticks attached so that the students can continue to play this sculptural percussion instrument. Created with local Santiago artists and teens, Max Frieder and Joel Artista 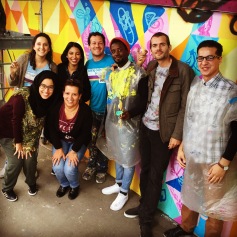 Brussels, Belgium, 2015: So many people stopped by to paint! 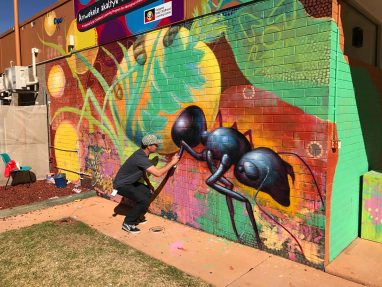 St. Petersburg, Russia 2017: Joel worked with kids who had experienced the street life and chaotic family lives, creating a mural with a sci-fi, surrealistic vibe. With Park Inn by Radisson hotels and local youth organizations. 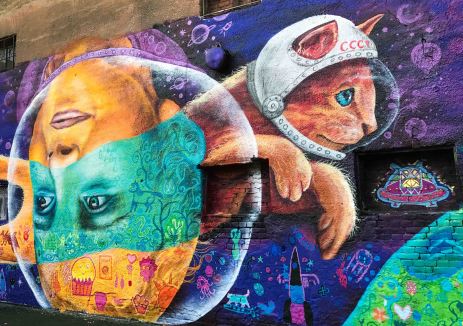 St. Petersburg, Russia 2017: Shooting for the stars! St. Pete is known for its many cats, and this one is wearing a helmet that any Russian will recognize: that of Yuri Gagarin, the famous cosmonaut!

Azraq Syrian Refugee Camp, Jordan 2017: Dareen, a participant in our Azraq Camp project, poses in front of a portrait of her. 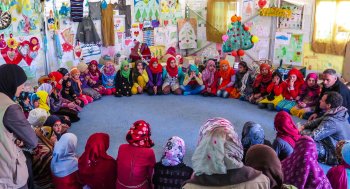 Za’atari Syrian Refugee Camp, Jordan 2017: “A La Rasi!” This mural is inspired by the Arabic phrase meaning “I put you on my head,” said to show respect and admiration for someone.

Jizr Az Zarqa, Arab Village in Israel, 2016: An environmental mural featuring an endangered sea turtle that is common in this fishing village.

Kolkata, India 2016: Joel and his wife, CJ, worked with Bengali artists and young people who had experienced human trafficking, life on the streets, and chaotic family lives. This epic mural on the outside of the Birla Academy of Art tells their story, from the demons of the past to building new, positive lives with the support of positive people and activities. 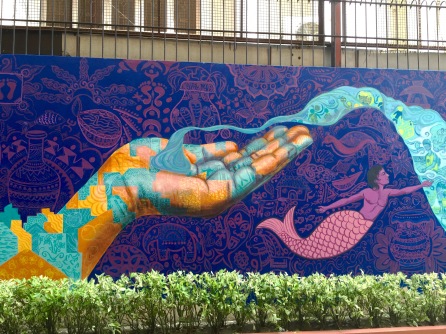 Springfield, Ohio: Joel worked with teenagers who had been incarcerated as part of the arts activities of Project Jericho organization, supporting the reintegration of young people in the justice system.

Oslo, Norway 2016: a talented teen shows off her creativity!

Oslo, Norway 2016: Joel and his wife, CJ, worked with local kids at a community center to create this piece.

Nairobi, Kenya 2013: Joel led the “Kibera Walls for Peace” program with local youth and graffiti artists in Kibera Slum, creating a series of murals advocating for ethnic unity and an end to political violence during a time of unrest in the lead up to the 2013 elections.

East Jerusalem, 2016: Mural created with Arab and Jewish girls, envisioning unity and reconciliation. With Max Frieder, Joel Artista and the US Consulate and Embassy.