In 2013, Joel headed to Dayton, Ohio to partner with the University of Dayton’s Art Street center for the Sex Trafficking Awareness Project. During workshops with local court-involved high school students, newly-arrived University freshmen and international students, Joel presented information about a serious and widespread crisis in Ohio and in the US, but which is often unknown or misunderstood: the forced prostitution of women and girls. The students discussed the topic, shared their thoughts, and created drawings and poetry that reflected their feelings about it, which they then painted onto a large canvas. Reflecting one of Action Ashé’s main goals, this project focuses on using the arts to educate participants and viewers about important human rights topics that are important to people’s lives but that are ignored or misunderstood by society.

The students’ expressions were combined with the image of the Roman goddess Proserpina in a struggle between her captor, the god of the underworld, and her mother who tries to free her. This mythical abduction is used to illustrate the violent and painful kidnapping and forced prostitution of thousands of girls and women, both American and foreign, across the US every year.

The project culminated in a panel discussion about the intersection between art and social action featuring Joel Bergner, a gallery show that included the newly-inaugurated mural and photography of Joel’s projects around the world, and a screening of “My Tribe is Kenya,” a documentary about Joel’s recent “Kibera Walls for Peace” initiative in Nairobi, Kenya.

Newly-arrived freshmen participating in one of the workshops. 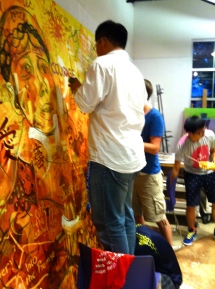 International students contributing to the mural.

International students at the University of Dayton participating in the Sex Trafficking Awareness Project.

The background of the mural with the poetry and artwork reflecting the students’ thoughts on the issue of sex trafficking.

A participant adds her poetry to the mural.