As the Syrian War rages on, desperate civilians continue to pour across the borders into neighboring countries. While they have escaped the death and destruction of war, many refugees now find themselves in desolate refugee camps across the region. Other refugees pack into towns and cities, straining services and resources, leading to strained tensions with local populations. Lives are on hold and official work is prohibited. While international humanitarian organizations scramble to provide food, shelter and medical care to refugees, other critical needs often fall through the cracks, such as educational and creative activities for youth to focus on, trauma relief and mentorship programs. There is a lack of arts and culture that enrich the human experience and no platform for refugee voices to reach out to the world to tell their own stories.

To address these issues, I’ve been traveling to Jordan since 2013 to facilitate mural arts projects with Syrian youth and their families. Through organization that I co-direct, Artolution, we’ve teamed up with Syrian artists and educators in the Za’atari and Azraq refugee camps. We lead discussion and art-making in which Syrians explore their longing to return to Syria, their dreams for the future, and their current plight as refugees. In host communities in Jordan, Syrian and Jordanian young people work on collaborative arts-based projects that focus on reducing tensions and promoting social cohesion between these two populations. Hundreds of children have had the opportunity to participate and add their own creativity to murals throughout the refugee camps and host communities, bringing color and life to a desolate environment and spreading messages of hope to local residents. 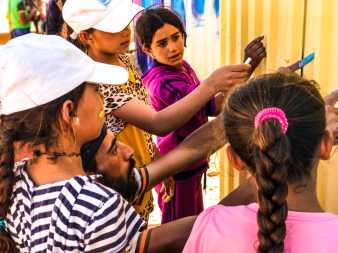 Artolution supports Syrian refugee artists by providing capacity-building workshops and opportunities to work in their field and to engage the youth in their community. In Za’atari Camp, the Syrian artist collective Jasmine Necklace has co-facilitated community mural and sculpture projects. In Azraq Camp, an artist team led by Mohammed Hassan Ibrahim has engaged dozens of children and teens through public art, and is now developing an arts-based mentorship program with Artolution and the International Rescue Committee (IRC). 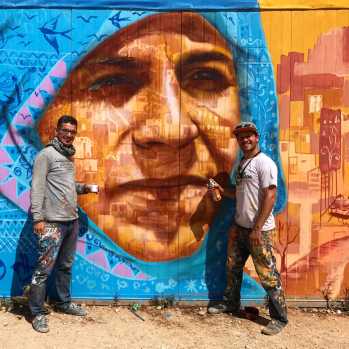 Me with Jokhadar (left) a local artist in Za’atari

It’s been an incredible experience for me to work with such resilient, warm individuals. The children we work with maintain their playful spark despite all the trauma and loss they’ve suffered. The adult artists and educators continue to strive to uplift their community, never giving up on their hope for a brighter future. I’m excited that my dream for setting up sustainable, ongoing arts-based programming in Syrian refugee communities, led by local artists, is now coming true thanks to our partner organizations who have the courage to believe in this initiative; thanks to everyone at the IRC, the Norwegian Refugee Council (NRC), GIZ, the European Union, UNICEF and UNHCR. In past projects, I’ve also partnered with the amazing aptART, ACTED and Mercy Corps. Last but not least, thanks to Max Frieder and everyone at Artolution, and all the local artists and the kids who made these murals come to life! 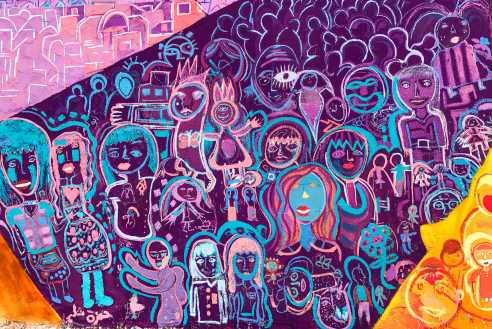 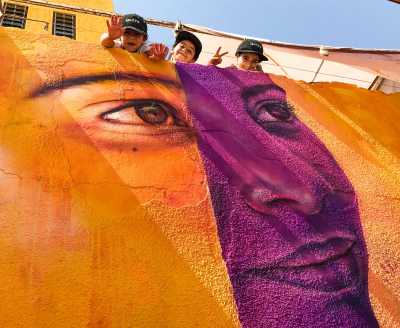 Za’atari Syrian Refugee Camp, Jordan, 2017:Syrians working on a mural in the camp 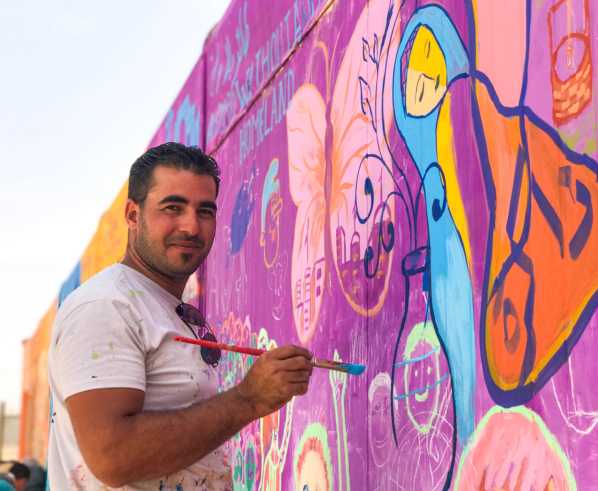 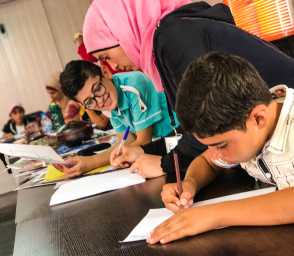 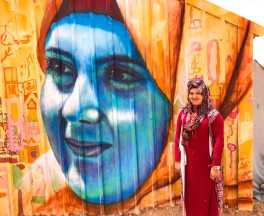 Azraq Syrian Refugee Camp, Jordan 2017: Dareen, a participant in our Azraq Camp project, poses in front of a portrait of her.

Mohammed, a 14-year-old resident of Za’atari Camp, shows his drawing depicting hope for the future after the horrors of war.

Noor works on a mural in her community in Azraq Camp 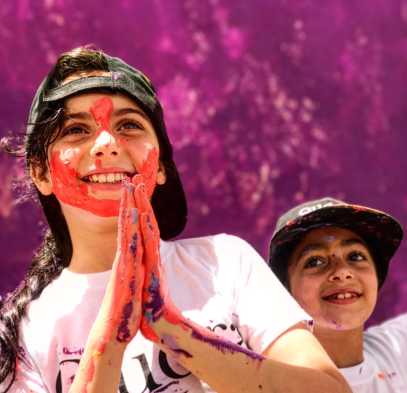 The boys of Azraq Refugee Camp

Za’atari Syrian Refugee Camp, Jordan 2017: “A La Rasi!” This mural is inspired by the Arabic phrase meaning “I put you on my head,” said to show respect and admiration for someone.

The Qudra (Resilience) team in Amman!

Eihaa reads a poem inspired by her participation in a mural project that bears her likeness.

Detail from mural in Amman

Local artist and dancer Sky, who partnered with us in Amman, doing some face painting.

A boy works on turning trash into art!

Za’atari Syrian Refugee Camp, Jordan, 2014: I Dream Of… Syrian kids painted their dreams for the future inside the shapes of this mural.

Painting a mural in Za’atari 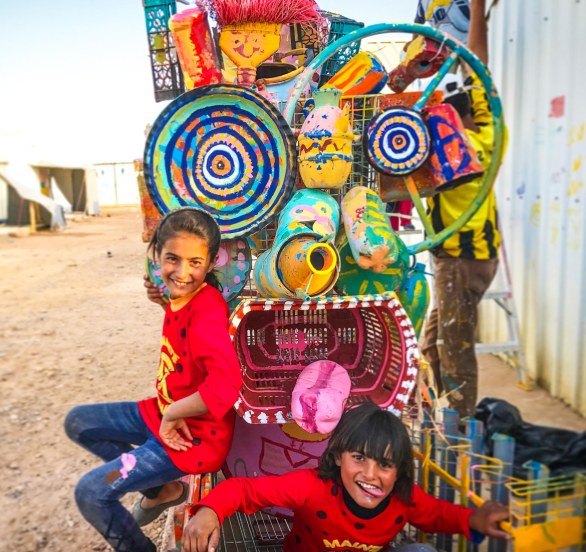 Fun with trash! This sculpture made of repurposed garbage was created with kids and Max Frieder in Azraq 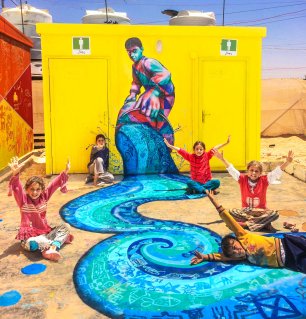 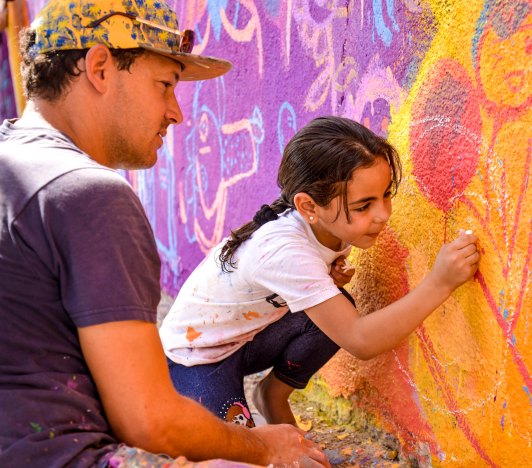 Me with an up-and-coming artist in Amman 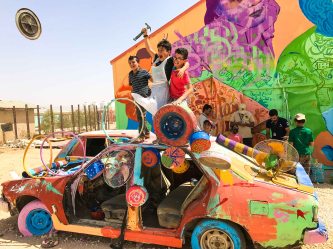 Syrian refugee kids are creating their own mural-neighborhood to reflect the growing realization that they may be displaced for a long time and must build new communities.

Working on a new piece right outside of the Za’atari Syrian refugee camp with boys who smuggle goods into the camp. There is little legal trade in the camp other than essentials, so these guys risk frequent beatings by the cops to make money on the huge black market. In our mural the kids envision the building of a new sense of community, as the old one has been lost.

A Syrian girl painting a mural in Za’atari refugee camp

Refugee camp swimming pool! What the kids in Za’atari do to beat the heat… 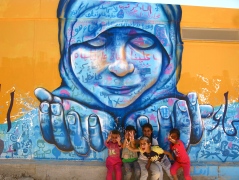 Za’atari Syrian Refugee Camp in Jordan, 2013. This piece was created in collaboration with Syrian refugee children, and explores the importance of water conservation, especially for those who suddenly find themselves stranded in a desert. Collab with the organizations AptART and ACTED.