After an incredible couple of weeks in London, I was off to Brussels for the third project of the #AddColourToLives tour, which features a partnership between myself, Park Inn hotels in five cities and local youth organizations. I literally went straight from the airport to the first workshop- no rest for the weary! The first project was at the Clair Matin group home for children who have been taken from their families, where we led workshops and painted a small mural on an indoor wall. The kids were so sweet and helped me learn some French. Within a day I knew all the colors! Of course, it was also difficult to see these children suffering, having been through so much during their short lives. 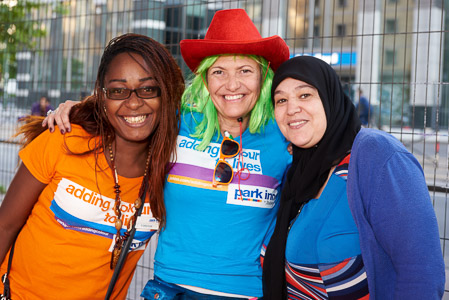 Even green-haired people are included on our team!

We then began on our big public mural in Brussels, which was to be on a giant wall on the outside of the southern train station, a very prominent location. It was a massive undertaking: at 56 meters wide and 4 meters high, it was split into 9 garage doors that were no longer in use, each separated with a big concrete slab. The crew was enormous as well: we had a core group of young people and staff from three different local youth organizations, but we also invited homeless people who sleep in the train station, outreach workers from the station, Park Inn employees and community members. By the end of 8 days of painting, over 150 people had participated! As with all the #AddColourToLives projects, the imagery and the theme were created by the participants themselves during the introductory workshop that I facilitated on the first day. The area around the station has a heavily immigrant and refugee population, so we chose to focus on the importance of creating an inclusive and welcoming society. This was especially relevant because our project was taking place during the massive refugee crisis in Europe.

A mother and son artist team contribute to the mural!

The mural begins with a sea of migrants painted by all the participants. The colors are dark and their journey perilous. A giant hand reaches out to welcome them as three migrants walk onto it. These characters were painted by Valence, who cleans rooms at the Park Inn by day and is a talented artist by night, along with her son, Rémi. A second giant hand cradles a sleeping homeless woman, modeled by one of our participants named Muriel, who sleeps on the streets around the station and became an integral member of the team. The shapes inside the two big hands are filled with the participants’ expressions regarding the importance of an inclusive society and welcoming those who have gone through hardship. The hands belong to a character with two faces, male and female, who makes up the centerpiece of the mural. Two of our most active youth participants, Ussin and Ajer, were excited to see their faces reproduced on a massive scale for this section!

Further down, a third hand holds a bowl of fruit with a traditional Belgian carnival character. The last hand serves as a diving board for a girl (another participant, Mabrouka) who jumps off and flies over a crowd of cheering, diverse characters. These hands feature the reflections, in words and images, of the participants regarding the great contributions that immigrants and refugees make in Belgium, and to all societies. Together they make a strong statement that inclusiveness is not only for the benefit of those currently in need; that everyone will reap the rewards of a welcoming society that nurtures a diverse cultural, political and social life. By including the participation of homeless people, refugees and community members of all types, the creation of the mural itself was an example of how people can come together in common cause and respect each other’s humanity.

Said and I before embarking on a 4 hour bike ride through the Belgian country side!

Of the many people to participate I would like to highlight one man, Said, whose story illustrates the power and importance of this type of community project. While not originally part of the project, this community resident who seemed to know everyone stopped by on the first day of painting and never left: he immersed himself in the work and stayed from morning to night. I painted a giant portrait of him as the representative of the wave of migrants. At first we could only communicate with the help of others, or in the few words we knew of each others’ languages. On the third day, I was ecstatic to discover that he speaks some Spanish, which I also speak. We could communicate! Soon, he was telling me his life story.

Said posing in front of his portrait

Said grew up in a port town in Morocco, where poverty led him to leave school at age 12 to embark on a highly dangerous career as a deep-sea fisherman. After witnessing the death of many of his friends over 11 years, he left and embarked on a colorful life as a circus performer, a competitive body-builder and a wood worker before taking a rickety boat to Spain in his 20’s in search of a better life, eventually ending up in Brussels. At 39, his life has gone markedly down hill. He has been out of work for three years, his stormy relationship with his wife came to a painful end and his daughter who he adores, age 6, is currently living in a group home for kids who have been taken from their families, where he is only allowed one visit every two weeks. He sometimes drinks too much and gets in fights, as do his rough friends in the neighborhood. He teared up as he told me about his family struggles, and how he is ashamed to visit his 80-year-old mother, who lives nearby, because she is so upset by the way his life is going. But the project, he told me, had given him a new outlook on life (in fact, it was Said who gave the mural its title, “A New Life”). He made positive connections with many people, all of whom were greatly impressed by his work ethic and noticed how tender and helpful he was with the kids and the homeless. He poured himself into the work every day. I could tell that he had turned a corner, and many of us began asking around the various project partners in search of a job for Said, knowing that is what he really needs to continue this upswing and finally move his life in a positive direction. This is why community projects can create positive change: it’s not principally about the artwork, but instead the positive human connections that are cultivated, often lasting far longer than the project itself.

After 8 marathon days of painting, the project culminated in a big public event hosted at the Park Inn. Many of us spoke about our experiences of the project and were excited and moved by all we had accomplished and the new friends we had made. We went across the street to view the mural and take group photos, and then had a big dinner. The festivities went late into the night, with all of us sad to say au revoir but proud of what he had accomplished. I want to thank Phillip and everyone at the Park Inn in Brussels and Leuven, all the youth and adult participants who worked so hard, everyone at the train station and—last but not least– Carolyn and Inge for making this all possible and being such a pleasure to work with!!

Carolyn, me, Inge and Said The view form across the street

The participants expressed their desire for an inclusive society in many ways, including poetry 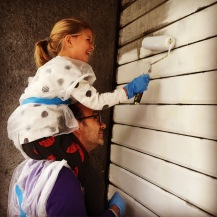 Many homeless people participated, including Carlos from Colombia, who created a video of the project for his Youtube channel!

Mural in Clair Matin home created with children who have been taken from their families.

Mural in Clair Matin home created with children who have been taken from their families. 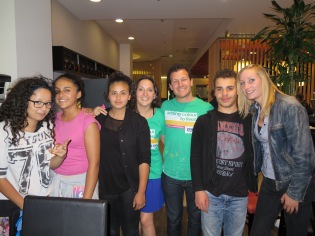 Discussing the meaning of the mural at the final event

Proud of their work!

Brussels, Belgium, 2015: So many people stopped by to paint!